“How do we reach our students?”

It’s a question commonly asked in marketing and communications offices on campuses around the country – and even the world. Oftentimes, the conversations result in emails, posters and posts on social media. More and more, those plans also include outreach via “backchannel” tools – like Snapchat.

“I knew I could not justify using it (at my previous job), but it spoke to higher ed,” she said. That year, 77 percent of college students used Snapchat every day, so she knew she was onto something.

UMich, a school of nearly 45,000 students, now uses the platform to give current students, prospective students, alumni and anyone else who may be interested a different perspective of campus.

In previous years, Sunstrum explained, the university sent emails to students in advance of football season with messages about tailgating and safety. Maybe this sounds familiar. But in 2015, her team turned to Snapchat and approached the message differently.

“We looked to campus leadership and student leadership, and they delivered the message line by line. And it instilled pride,” she said. The story outperformed other stories they had posted, with more than 90,000 views. The university also put the Snapstory on Facebook and Twitter.

The team has also used Snapchat to convey information about move in, the application process and university diversity. They also worked with the Department of Public Safety on a “Run, Hide, Fight” campaign.

Sunstrum said these stories are well received because they’re being delivered on a platform the students already use and with which they’re familiar. But, she warns, “Content is vital. It’s ephemeral and will disappear, so be aware that if you don’t use [Snapchat consistently], it will be blank.”

Getting out of our own  way

Content generation is one reason why Beloit College has employed several of its students as “Snapchat Personalities.”

Melissa Dix, the college’s director of digital media and creative services, said the college trimmed down its lookbooks to a trifold brochure with a Snapchat sticker on the front in July 2015 and hired current students to showcase life at Beloit using Snapchat.

“We’ve had a huge increase in applications,” Dix said, crediting the implementation of Snapchat with some of that.

“Our Snapchat personalities do a lot of question-and-answer sessions with prospective students, and we have really great engagement with those,” she said. Beyond that, the students show life in the dorms, in classes and around campus.

So where does Dix go for creative ideas? “Certainly not higher ed,” she said emphatically.

Instead, Dix looks to her current student team. “I try to encourage them and inspire them, and then I get out of the way.” But she also looks to brands that these students wear or are talking about – brands like Under Armour and Taco Bell. “We look to where people hold their allegiances. We want to be like them,” she noted.

Beloit also tried something new in 2016 – Snap Admits. Students had the opportunity to opt in to hearing via Snapchat first whether they were accepted to Beloit. “It feels more personal,” explained Dix. “They’re really excited.”

And, Dix said, it worked. Of the students who opted in, they had a 40 percent yield rate, versus a 13 percent yield among those who received the acceptance message in a traditional manner.

Both Beloit and UMich have used Snapchat to showcase various groups on campus and a variety of students. Both Dix and Sunstrum discussed the importance of having a plan and knowing what content is going to be featured each day. And both also say while it’s important to engage with your audience, there’s no need to respond to every single snap back.

“It’s okay to view it and not do anything with it,” said Sunstrum.

So what’s next for these schools and Snapchat? Both are closely watching their analytics to help determine that. They’re exploring more and looking ahead, but staying tight-lipped.

“Our Snapchat game is not done yet!” promises Dix. 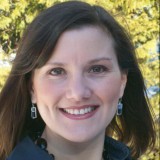 Kara Matuszewski Sassone is a web producer and social media specialist for the College of Science at Northeastern University. Before moving into higher ed, she was an anchor and reporter for the NBC stations in Maine and had the opportunity to know TC before he became famous.