It’s always fun when you receive less-than-specific guidance on mission-critical campus projects, especially related to the web. At HighEdWeb 2017, Martin Sickafoose from Purdue University showed us that even something as nebulous as “make the website cool” can be accomplished through data-driven, strategic decisions.

Martin started his presentation by taking us back in time, all the way back to 1997. Remember when this was a cool website?

But nothing is ever good enough for Martin. I’m pretty sure Martin is a dreamer. In 2010 he started to ask really out-there questions, like, “What if we built a website focused on our audiences?” His motivation was largely fueled by a desire to speak to each audience in the way they want to be spoken to, like how television ads had long been created for different demographics. The Web was becoming a main channel for media consumption, so why should campus websites not respond in the same way?

Four years later, a responsive, audience-based redesign rolled out, and Martin was ready to crunch the numbers and see if it was having an effect. The results were astounding.

Life was great and everyone is happy, right? I mean, if I was the Board of Trustees, I’d probably have given Martin a puppy. But a certain board member with experience in a sector outside of higher education wanted more. She wanted the website to become cool. So, how do you define cool? With data, of course.

Martin consulted two main data sources to figure out what the cool new purdue.edu would look like.

Basically, Martin determined that what is cool is highly personal, and at a much more granular level than audience. So now, purdue.edu has yet another iteration.

Homepage links are down to about 90, and the hero image has returned (but this time it’s user-generated). Topics that the data indicated were important to users are elevated on the homepage. And later this year, Purdue will start testing a completely customizable homepage design so the personalization is not just audience-based, but down to the individual user level. I’m hopeful that Martin will share some of those results with us at HighEdWeb 2018. 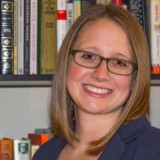 Liz Gross is the Director of Campus Sonar. Her professional super powers include designing and analyzing market research, applying social media strategy to multiple areas of the business, explaining difficult concepts in simple language, and using social listening to develop consumer insights and assist with reputation management. She received her Ph.D. in Leadership for the Advancement of Learning and Service in Higher Education at Cardinal Stritch University.