China is a huge market for students, Boston University’s Carol Duan discussed their use of Chinese social media networks to reach out to prospective students.

In 2013, BU recognized that Chinese nationals made up the largest percentage of foreign students on campus, but didn’t have an effective way to reach them. Many western social networks, like Facebook, Instagram, and Twitter, are blocked in China… but they do have rough equivalents which allow students to reach home to connect with family and friends.

BU had four goals: community building, student recruitment, content distribution, and reputation building. They decided to use two main channels, Weibo and WeChat, and three video channels: Weibo, Youku, and Tencent. They quickly accumulated over 15,000 followers on those accounts!

Weibo serves as their main source for news and information. For international students, the visuals are important; Carol noted to “not make your audience suffer with a lot of text.” They used lots of visual content — videos & infographics — and some of their content has received more than two million views. They treated Weibo similarly to their main channels; distributing editorial comment and cultivating help from influencers.

A BU student became a celebrity in China after her speech video was shared. She was interviewed by main media in China. #mcs7 #heweb17 pic.twitter.com/bjj4d4IOoj

WeChat is “an app for everything.” It has 889 million monthly active users, with an average time of 66 minutes per day. 80% of users use WeChat as a platform to interact with friends, and the top “official account” categories that people follow are “interests and hobbies” (41%), news (36%), and career-relate (20%). There are different types of accounts — subscription or service — based on your plans and goals.

Carol suggested that schools ask themselves, as with starting any new social media channels:
* Is it necessary?
* What are your goals?
* Who are your target audiences?
* What content should you share?
* Do you have the required personnel?
* What’s your budget?
* How will you measure success?

She noted that there are services in China that you can contract with to do much of the work for you, which is an appealing option for campuses who don’t have the ability or personnel to handle it internally.

She also reminded us to know our audience: Be sensitive to cultural differences, limit the use of acronyms, abbreviations, and jargon; international students literally don’t speak our language! 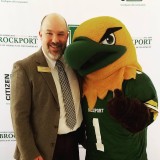