So let’s talk about HighEdWeb 2017, and our Wednesday keynote speaker — creator, author, actor (and general vector of awesome) Felicia Day.

Here at HighEdWeb we are big — huge — GINORMOUS fans of Ms. Day. As you might already know, she is a seriously talented actor, appearing in shows like “Buffy the Vampire Slayer,” “Dr. Horrible’s Sing-Along Blog,” “Supernatural” and “Eureka.” She can currently be seen on Netflix’s revival of “Mystery Science Theater 3000,” on which she plays the main antagonist AND rocks a truly fetching purple velvet lab coat — no mean feat.

Ms. Day is also, as they say, “big on the Internet” — as the creator, writer, producer and star of the award-winning original online series “The Guild” (one of the first online projects to receive crowd funding), she was a pioneer in the serial online entertainment concept. She has built a network of millions on Twitter, Facebook and Instagram, and is the creator of the crazy-popular Geek & Sundry YouTube channel, which ranks #2 among originals, with nearly 1.275M subscribers and over 170 million views.

And because that wasn’t enough, Felicia’s recent memoir “You’re Never Weird On the Internet” debuted at #3 on the NY Times Bestseller List and #4 in the UK in the Sunday Times.

Plus she’s a classically-trained musician, an avid gamer, and a new parent.

But even more than that, Ms. Day understands what it’s like to exist in digital spaces. She knows the value of being part of a strong virtual community, tied together with electronic thread. She gets what it means to be unique, to be different, to embrace your passion, to try, to fail, and to try again — and succeed on your own terms. In Ms. Day, we have a keynote for #heweb17 who is, we think, one of us: smart, dedicated, passionate and committed to the idea that the Internet (and the people who live there) really, truly matter.

Join us in Hartford on Wednesday, Oct. 11, to hear some words of inspiration from Ms. Felicia Day. And don’t forget your purple velvet lab coat. 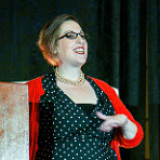 Colleen Brennan-Barry (@ColB) is past president of the Higher Education Web Professionals Association, serves on the conference committee for the annual HighEdWeb conference, and is the Vice President of Marketing and Communications at the New York Chiropractic College in Seneca Falls, N.Y.